To know the principles of operation of the suture we should know suturing techniques in general. there are several factors influence on suturing result such as correct wound placement with respect to relaxed tension line,

minimize the tension that causes wound separation and good choosing suture material. Good suturing technique should give a rise to completely get rid of dead space on subcutaneous tissue. Some suturing techniques per following:

This most suturing technique that is used in cutaneous surgery and it’s suitable for almost all procedures.
Application: the needle is inserted in one side of wound approximately 5mm of wound edge, then it’s passed through the full dermis depth, then the needle is passed through the subcutaneous tissue to the opposing side for wound and closer the wound edge, the knot is tied close to the wound edge for each stitch, thus the final configuration of suture cross section is flask-shaped.
The mean disadvantage of this technique is leaving a linear scare and if interrupted suture is not placed correctly tend to causing wound inversion. 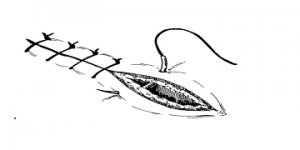 Procedure: at the first step; interrupted suture is placed on one end of the wound, then knot is tied in the same insertion place without cut a knot, reinsert the needle along the wound whereas the needle penetrated the epidermis and passed through dermal or subcutaneous. It’s important to keep evenly space between each stitch at all suture continuous series, finally the single knot is placed by itself or on strand loop at the end of the incision.
This type is useful for securing full- or spilt-thickness skin graft and for long wounds that have purposefully reduced tension acting on it with properly placed deep suture, the continues sutures are placed rapidly and have less chance to scare occurs compared the interrupted sutures. 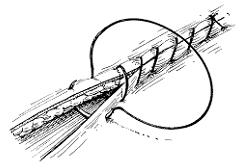 Procedure: The needle is inserted per as the interrupted suture then the needle is passed dermally or subcutaneously toward the opposing side of wound edge and brought out into opposing side in the same way, re-inserted skin on the same side where needle is exit’s at the same distance but some millimeters away of the needle exit’s Horizontally where the needle is penetrated skin layers at the same first penetration depth, finally the knot is tied on the original side of wound.
This way reduces the wound tension, closing the dead space. Horizontal mattress suture is useful in the palm and other area as well as wound under tension. 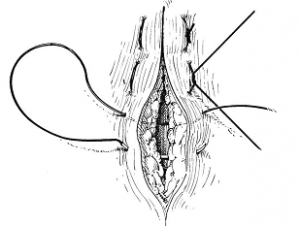 Procedure: this type of suture is started 1-0.5 cm lateral of the wound edge and the needle is inserted to depth of dermis to close all dead space then the needle is passed through the deep opposing tissue, where it existed the opposing skin side, then the skin is penetrated again on the side where through the needle exited but more closer to wound margin (1-3 mm of wound margin), then the knot is tied on the original insertion side. This technique is the best technique to ensure of wound eversion. It’s usual for; reducing wound tension and dead space, position with poor support area and mobile skin. 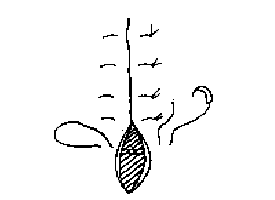 Procedure: the needle is inserted 1 cm from one end of incision within superficial layer dermis then the needle is placed horizontally on the everted edge at opposing side and brought out through the upper dermis of wound, the knot has tied within the wound/outside the wound like simple interrupted suture or the suture can be continues at the long of wound and the knot is tied at the end of wound, then the needle is inserted horizontally on dermis on one side of wound at the same level of the initial insertion and brought out at the same level, then the needle placed horizontally on superficial dermis on opposing side of the previous insertion point, this process should be repeated on the full length of the wound.
This technique is useful plastic surgery where no marks on the skin surface as suture placed with the superficial, also its useful for closing the wound with equal thickness. 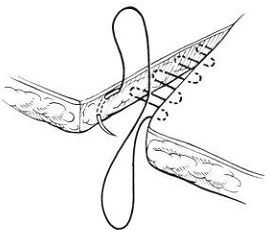 Procedure: the needle is inserted into the wound depth under dermis and brought out from the top of dermis layer, the re-inserted needle into the dermis in opposing site and brought out into wound at the same depth of the original insertion. Then the knot is tied within the wound and buried depth the skin so that the knot protrudes are inside.
This technique is useful to support wound, to remove dead space and when use large diameter of permanent sutures on deep layers.

There is a wide variety of sutures technique, users should be familiar with all suture’s technique.